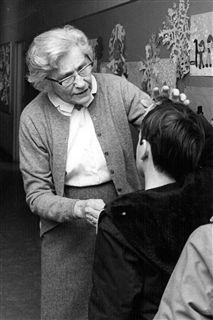 A nonsectarian school today, Norwood was founded in 1952 as a parish primary school at St. John’s Church in Bethesda, with 40 students in grades K-2 and four teachers, under the direction of Frances Brandis Marsh. Through more than 60 years of growth, Norwood School has held fast to Mrs. Marsh’s original vision of “a happy place of learning for children…filled with art and music…where each child would feel supported and valued.”
It was important to Mrs. Marsh that Norwood was a place where when children left at the end of the day, they couldn’t wait to come back in the morning. Despite running the School out of four different locations with limited facilities during the first 19 years, Mrs. Marsh always created a happy and nurturing school home where children thrived and where parents played many important roles in the community. In fact, it was through the vision, will, and generosity of a group of parents and supporters that Norwood moved to its current home at the corner of River Road and Bradley Boulevard in 1972, providing ample space for growth.
Norwood had expanded to sixth grade in 1976. A year later, Mrs. Marsh retired and Thomas C. Hudnut was appointed headmaster. When Mr. Hudnut moved to the West Coast in 1982, Weedie Block, the lower school principal and Norwood teacher since 1967, served as interim head during a nationwide search for the next head. Richard T. Ewing, Jr., a former sixth grade teacher at Norwood who had just completed his doctorate at the Harvard Graduate School of Education, became the fourth head of school in 1983. When an additional 16.7 acres of land was acquired in 1995, the Board of Trustees made the decision to expand the School to include seventh grade (added in 1998) and eighth grade (added in 1999). A new middle school building, athletic center, and athletic fields were added in 1999 after a highly successful capital campaign. Mr. Ewing retired as head of school in 2014 after a distinguished 35-year career, and Matthew A. Gould, Ph.D. was appointed Norwood's fifth head of school on July 1, 2014. Today, Mr. Gould, together with 20 trustees, leads a school of approximately 450 students supported by 115 faculty and staff members. In the fall of 2017, Norwood expanded to include its first pre-kindergarten class.
The scope and complexity of the existing programs in reading and language arts, math, science, social studies and history, technology, world languages, art, music, physical education, and character and spiritual development have continued to evolve and expand over the years – while staying true to the original educational philosophy emphasizing joy in learning, exceptional academics, the right blend of challenge and support, vibrant art and music programs, and the guiding principle that “how you lead your life matters.” The character and accomplishments of Norwood graduates provide powerful testimony to the success of the School’s program.

Each year, on or around May 17, Norwood School pays tribute to its founder, Frances Marsh, with a special chapel program in honor of her birthday. Everyone brings a flower to school in recognition of Mrs. Marsh’s love of gardening and we create enormous community floral arrangements to enjoy throughout the day.
Located in Bethesda, MD, Norwood School develops students in grades PK-8 into confident lifelong learners who have the academic, character, and leadership skills to succeed in high school and beyond. Recognizing that children are multi-faceted, Norwood provides many opportunities for safe risk-taking, exploration, discovery, and growth in a nurturing, supportive, and inclusive school community.