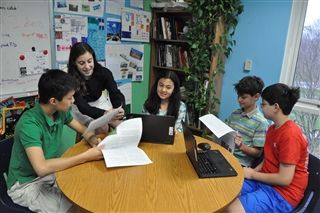 Extra! Extra! Read all about it! Norwood’s sixth grade writers and publishers have been busy churning out a series of newspapers, complete with news stories, feature articles, letters to the editor, op ed pieces, advice columns, weather, and comics.
The newspapers are the result of a project assigned after students finished reading, Tangerine, a contemporary novel by Edward Bloor, in their reading/language arts classes.

Rather than give the students a singular writing prompt to complete independently, the sixth-grade reading/language arts teachers devised a more complex, project-based assignment. Combining classes, the teachers divided students into small working groups and asked each group to create a newspaper based upon the events in Tangerine. They expected to see plenty of teamwork, negotiating, compromising, problem solving, and hand wringing as they scrambled to meet deadlines – just like in real life.

Within their working groups, students took on a variety of roles: interviewers, researchers, reporters, editors, proofreaders, graphic designers, photographers, and desktop publishers. They delegated, allocated, collaborated, and played to their strengths to produce a comprehensive and well-written publication that would not only reflect their understanding of the novel, but each student’s ability to work as part of a team. For example, one group’s newspaper, Tangerine Today, featured a lead story on a sinkhole at local school, a feature story on a young football star who died after being struck by lightning,  an advertisement for lightning rods, and an op-ed piece about the risks of holding outdoor football practices during storms, each piece reflecting incidents and characters in the novel.
The newspaper publishers learned that working within a group to meet a tight deadline is challenging. One student shared: “The assignment helped me understand that if you're in a group, there are always going to be bumps, and I learned that making a newspaper is hard because you don't have a lot of time.” Another sixth grader said, “I think this project was worthwhile. It taught us skills that could be used for real jobs. I learned this type of writing is a long, complex process.”
Back
Located in Bethesda, MD, Norwood School develops students in grades PK-8 into confident lifelong learners who have the academic, character, and leadership skills to succeed in high school and beyond. Recognizing that children are multi-faceted, Norwood provides many opportunities for safe risk-taking, exploration, discovery, and growth in a nurturing, supportive, and inclusive school community.